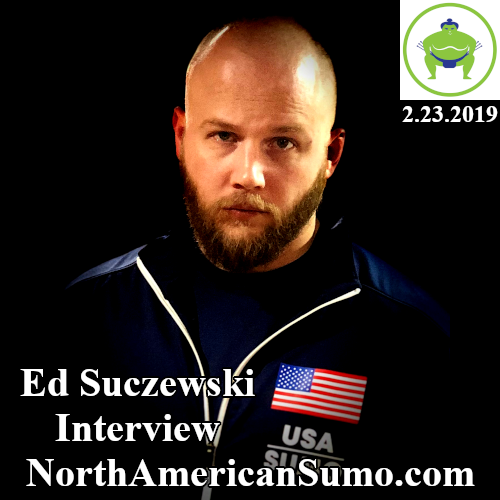 Ed is now eyeing gold at the US Sumo Open on March 23rd, which will be followed by the World Sumo Championships later this year.  NorthAmericanSumo.com was lucky enough to conduct an interview with Ed Suczewski, in which he talks about his mindset before competitions, his trips to Japan to train sumo, and even how the United States Sumo Federation is helping spread sumo all across North America. . .and a lot more!

In this interview, Ed mentions the four links that are provided below.  The first is the most important, so be sure to check it out!

Click the YouTube video below to play the interview, which is followed by gifs of Ed’s three favorite matches.  Or, at least, three of his favorite matches.  As always, feel free to contact us at NorthAmericanSumo@Gmail.com if you have any questions or comments!

Aron Rozum is one of the most accomplished middleweight amateur sumo wrestlers in the world.  He is a multiple World Sumo Championships medalist, winning the silver in 2018.  Ed was able to take him down at the US Sumo Open 2016, adding to the long list of major victories in Ed’s career.

In this match, Ed and Sebastian were competing for the bronze medal at the US Sumo Open.  Ed was able to get the victory and the medal, putting the multiple-time South American champion in fourth place.  This was Ed’s first sumo medal.

The final gif was for gold in the middleweight division at the US Sumo Nationals.  Ed was able to force out the perennial favorite, Kena Heffernan, giving Ed his first ever national championship.

On a closing note, I feel that I will have another interview with Ed sooner rather than later.  We wanted to keep this interview around the 30 minute length, so he mentions a lot of very interesting things that I would love to dig into further.  So, be sure to check out NorthAmericanSumo.com in the future to hear more from Ed and his sumo adventures!