Before doing so, readers should be aware of the different ranks of Japanese sumo.  If you need a refresher, be sure to check out our Getting Started page.  Otherwise, just refer to the figure below.  It shows the hierarchy of divisions as well as the number of rikishi in each division during the Aki basho 2018. 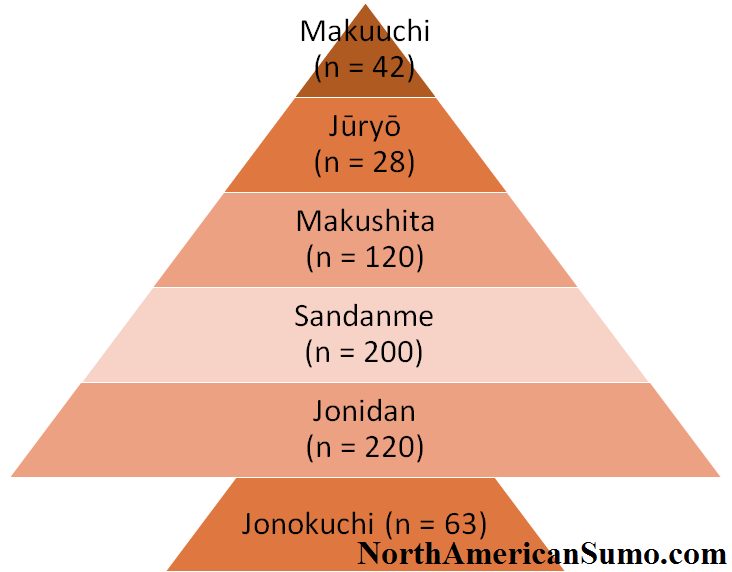 Also, the current page was written in September of 2018.  The standards of Japanese and North American sumo can and will change – and I hope they do!  Once this happens, I will make a new post comparing sumo in the two locations.

If you believe that I left anything out of my analysis, please email me at NorthAmericanSumo@Gmail.com.  I believe that I discuss each rikishi that competed in the elite tiers of both countries, but there is always the chance that I left someone out.  Sorry if you are one of those people!

Rikishi that Competed in Japan and then North America

Byambajav Ulambayar competed in Japanese sumo between July of 2001 and May of 2005.  During that time, Byambajav received a yusho (first-place finish) in the jonokuchi division for his first basho, had multiple 6-1 finishes in three different divisions (jonidan, sandanme, and makushita), and made it as high as the 15th rank in the makushita division.  It seemed like Byambajav was destined to compete in the upper-levels of Japanese sumo. . .but he never even made it to the juryo division.  Allegedly, he had to withdraw from the sport due to injury, but information about his withdraw from Japanese sumo is scarce and his reasoning is still largely unknown.

Needless to say, Byambajav made his own personal sumo dynasty in North America.  No one has approached his level of dominance and mystique in North American sumo.  He has represented the sport extremely well, and North America has been privileged to have him as a competitor in the great sport of sumo.

Byambajav helps illustrate the performance differences in Japan and North America.  It is clear that a makushita rikishi could dominate the U.S. sumo scene, and someone like Musashikuni Mamu would probably win the U.S. Sumo Open.  Even yet, it is probably safe to assume that Byambajav hasn’t been training as hard in the U.S. as he was in Japan.  So, it is also probably safe to assume that someone below the makushita division would also win the U.S. Sumo Open, and it is very realistic to assume that someone like Wakaichirō Ken would also win if given the opportunity.

Koichi Kato never competed in professional sumo, but he was a well-known figure on the Japanese amateur sumo scene.  He competed multiple times in the All-Japan Sumo Championship, which is the top tournament for amateur Japanese sumo.  Competitors consist of high school students, college students, and even working adults.  Koichi finished tied for third place in 1999, first place in 2003, and tied for third place again in 2005.  For his first-place finish in 2003, Koichi was awarded the title of amateur yokozuna.

Unfortunately, Koichi did not return to the U.S. Sumo Open in 2007, which was the first year that Byambajav Ulambayar participated.  So, we were denied a North American showdown of a lifetime.  Nevetheless, Koichi Kato clearly showed that an elite amateur rikishi can dominate North American sumo, and the makushita division is well above North American standards.  Again, it is reasonable to believe that Musashikuni Mamu would probably win the U.S. Sumo Open and Wakaichirō Ken would also win if given the opportunity.

Rikishi that Competed in North America and then Japan

Brodi Henderson competed in North America before traveling to Japan.  His first participation in the U.S. Sumo Open was 2010, where he made it to the heavyweight semi-finals with a 2-2 record.  Not bad for a 15 year old!  Brodi sat out the following year, but participated in the 2012 U.S. Sumo Open.  He was unfortunately unable to amass a win, receiving an 0-3 record in an extremely difficult opening round pool of Byambajav Ulambayar, Kelly Gneiting, and Justin Crite.  The following year, 2013, Brodi once again had a lackluster heavyweight performance in the U.S. Sumo Open, unable to leave the opening round pool with a 1-2 record (again, in a pool that included Byambajav Ulambayar and Kelly Gneiting); however, Brodi finally saw success in the openweight division.  He finished fourth overall, defeating the very talented opponents of Edward Suczewski and Andre Coleman.

Brodi’s final year participating in the U.S. Sumo Open was 2014, where he finally found the success that he was looking for.  He was able to make it to the quarterfinals of the heavyweight division with a 2-1 record, and he finished first in the openweight division.  To win this gold, he had to defeat Jesse DiSimone, James Thompson, the legendary Byambajav Ulambayar, Jay Holder, and Kena Heffernan.  Clearly, Brodi’s size and weight was finally able to overcome his youth, as he was only 19 years old but 6’7″ and 317 pounds at the time!  While the openweight division does seem to require more luck to win, Brodi’s achievement should not be dismissed because he still beat the best competitors in the field.  The 19 year old rikishi was already approaching the peak of North American sumo.

Brodi’s foray into Japanese sumo was similar to his North American endeavors – some early difficulties before finding his footing.  He had a 3-1 record in his mae-zumo bouts, but only a 4-3 record in his jonokuchi matches.  Nevertheless, this was good enough for a promotion, where he thrived in the jonidan division.  He went 6-1 and 6-1 in his next two bashos, finding himself in the middle of the sandanme division.  As expected, he slid back during his next two bashos, producing a 3-4 and 3-4 record in both.  He was the ranked 77th in the sandanme division (out of 100), when he unexpectedly never competed in Japanese sumo again.

Brodi’s full story will be an entire different post on NorthAmericanSumo.com; however, it should be recognized that Brodi (a) practiced in a Japanese dojo for about a year between his first and last matches, (b) appeared extremely nervous during his first few bouts, and (c) was allegedly undergoing severe harassment during his time in Japan.  The harassment even resulted in multiple rikishi being banished from the sport forever.

So, it is a little difficult to determine how well Brodi would have fared if he was given a proper training environment in Japan.  At the same time, his training in Japan was probably more rigorous than his training in America, and he likely was a better rikishi during his excursion to Japan than his initial bouts in America.  These factors should be taken into consideration when determining the comparison of Japanese and North American rikishi.

From Brodi’s experiences, it would appear that an upper-level North American rikishi (e.g. heavyweight semi-finalist, openweight semi-finalist) is beyond the skill-level of the jonokuchi and jonidan divisions, and they would quickly find themselves in the sandanme division if they joined a Japanese dojo.  It is this point that the North American rikishi would likely need to substantially improve before advancing to the upper-levels of the sandanme division or the makushita division.

So, where do North American rikishi stand in relation to Japanese rikishi (and vice versa)?

Clearly, Japanese rikishi are currently superior to North American rikishi.  Byambajav Ulambayar created a personal North American sumo dynasty for over a decade when the came to North America, and he was “only” in the makushita division in Japan.  Likewise, Koichi Kato was a Japanese amateur sumo champion, which is often equivalent to the upper-levels of the makushita division, and he won the U.S. Sumo Open two years in a row without losing a match.  It seems that makushita rikishi blow North American rikishi out of the water.  Therefore, it is realistic to assume that most any makuuchi, juryo, or makushita rikishi would win the U.S. Sumo Open.

On the other hand, Brodi Henderson was able to speedily advance to the sandanme division in Japanese sumo, after finishing in quarter-finals of the heavyweight division and winning the openweight division of the U.S. Sumo Open.  However, he began to sputter-out at this point.  While this could be attributed to his circumstances in Japan, it cannot be certain that he would have advanced further in such an easy manner.  Therefore, it seems that upper-level North American rikishi may be equivalent to the lower- to mid-levels of the sandanme division.  Winners of the heavyweight and openweight divisions of the U.S. Sumo Open could quickly progress through the jonokuchi and jonidan divisions, but they would probably need extensive training before making it much further.

From this conclusion, three further points should be made.  First, it seems that the best North American rikishi currently compete in Japan, as Musashikuni Mamu is in the makushita division and Wakaichirō Ken is progressing through the sandanme division.  If they were to participate in the U.S. Sumo Open, I would bet on them to win.

Second, North Americans can succeed in Japanese sumo, but Japanese rikishi are currently better overall when compared to North American rikishi.  If a top North American competitor joined a Japanese dojo, then they could reach the same heights as Akebono Tarō or Musashimaru Kōyō.

Third, North America is a land of untapped sumo potential.  It is fully possible, if not likely, that hundreds of North Americans could win the U.S. Sumo Open with modest sumo training; however, the sport of sumo does not currently attract the top North American athletes.  For instance, most any NFL lineman could probably grab gold in the heavyweight and openweight divisions.  After all, Roy Sims was a journeyman Arena League Football player, and he has won both the heavyweight and openweight divisions of the U.S. Sumo Open.  Perhaps this may change one day, but North American sumo can only be gauged by those currently competing in the sport.

That is all for the comparison of North American and Japanese rikishi.  If you have any questions, comments, or criticisms, please email me at NorthAmericanSumo@gmail.com.  Thanks for reading!