The Lone Star Sumo 12th Annual Texas Classic was held last weekend on October 13th in San Antonio, Texas.  The organizer of the event, Tom Zabel, is well known in North American sumo circles, and he has done great things to encourage the growth of sumo in the United States.  He hosts many sumo events each year, including the Tejada History Faire sumo demonstration, the Asian-Pacific Fiesta sumo tournament, and the Lone Star Sumo Texas Classic.  He is active in the administration of the United States Sumo Federation, and he has also published a quintessential book for English-language speaking sumo fans, entitled “Sumo Skills: Instructional Guide for Competitive Sumo” (link here).   Tom even participates in sumo himself, and you can find many videos of him on Youtube competing in the tournaments that he hosts.  Below is a gif of him playing it safe in the 2012 Fiesta Open Sumo Tournament.

I emailed Tom asking for information and media regarding the Lone Star Sumo 12th Annual Texas Classic.  Much to my surprise, he had already written an article that I could share!  So, below is Tom’s article about the event, followed by some of my reflections about the match outcomes.  If you have any questions or comments, please email me at NorthAmericansumo@Gmail.com.  Also, I would like to thank Tom Zabel for providing this write-up.  This article would not be possible without his efforts – all the way from providing the information, hosting the event, and doing everything he can to ensure that sumo is seen in North America! 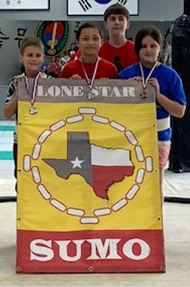 The Lone Star Sumo 12th Texas Classic was held on 13 Oct, 2018 in San Antonio.  We had 9 senior and 4 junior competitors.  For the Juniors, Dana and Steven came in from Houston and Rebecca and Nathan were locals from San Antonio.  After a two round, round robin match-up Rebecca took top honors, followed by Nathan in second, and Dana placed third.

In the female divisions we had Jessica Hopper in the light division and Jasmin Jones as a heavyweight.  The two of them have squared off against each other for several years.  They competed in a best-of-five match with, where at the end of four, it was tied 2 – 2.  This last match not only determined the winner for the tournament but also for the title of (Female) Texas State Champion.  Jessica was resolute in retaining her crown and after a grueling match came out victorious.  She captured the gold medal for the day and Jasmin took home the silver.

On the men’s side, we had seven competitors:  Will Robinson, Pearson Cooper, and Kevin Bittner from the Houston area; Brian Bittner from Dallas, Cornelius Booker from Florida, Shaun Jackson from Pennsylvania, and John Horst from San Antonio.

Kevin, Brian, Cornelius, and Pearson made up the new 100kg division, while Will, Shaun, and John were heavyweights.  Cornelius went undefeated, winning the gold.  Brian finished with the silver, and Pearson the bronze medal.  In the heavy division, Shaun placed first, John took second, with Will sitting at third.

The Men’s Open was exciting with many good matches, especially considering for almost half the field, it was their first tournament.  Cornelius continued undefeated for the day (12-0) and took home the gold medal.  Shaun won the silver, and John garnered the bronze.  The Kantosho, Fighting Spirit Award, went to newcomer Kevin.

The points for the men’s state title had to be calculated after the tournament was completed:  Brian Bittner is the 2018 Texas State Champion!

Speaking of finding videos on YouTube, I tried to find footage of Jessica’s and Jasmin’s prior bouts – either against each other or against other competitors.  Unfortunately, I could not find a single one of their matches.  So, no gifs for the women in this article.

As for the men, the most recognizable name is certainly Cornelius Booker.  Cornelius is a multi-time semi-finalist of both the U.S. Sumo Open and the U.S. Sumo Nationals.  Readers of NorthAmericanSumo.com will remember Cornelius from our review of the Georgia Sumo Open, which was held two weekends ago.  He finished fourth, below expectations, and I noted it was probably because he was bumped-up a weight-class.  It seems that this assumption was correct, as he absolutely dominated the Lone Star Sumo 12th Annual Texas Classic.  He was undefeated for the day, which is no easy task in any tournament!

I don’t have any footage of the Lone Star Sumo 12th Annual Texas Classic, so here is a gif of Cornelius from the 2016 U.S. Sumo Nationals competing against Americus Abesamis.  I think this shows that Cornelius clearly had great sumo instincts earlier in his career, which has only improved to today.

Lastly, I don’t know anything about the other male competitors, and I couldn’t find anything online about them.  I’m assuming that most of the competitors have solely competed in the Texas sumo tournaments held by Tom.  To be honest, though, I think that is a good thing.  It shows that there are many sumo wrestlers “under the radar.”  Some fans of North American sumo believe that there are no rikishi outside of those competing in the U.S. Sumo Open or at the U.S. Sumo Nationals, which makes the sport seem very small.  However, this is clearly not the case.  Tom is providing a wonderful space for these novice rikishi to hone their skills and have a good time.  And for that, I greatly appreciate everything that Tom is doing.

To finish this post, I want to include one last gif.  This is a lightweight bout from a Lone Star Sumo Tournament in 2013 (I think).  It show that fun sumo action has been found in Texas for quite awhile!