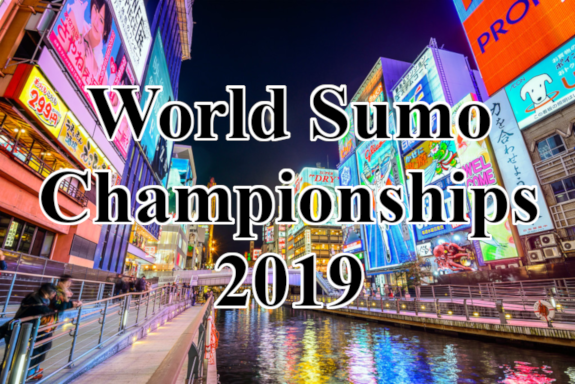 As you know, the World Sumo Championships 2019 ended a few weeks ago.  Although Team USA didn’t quite live up to their hopes and dreams, they nevertheless put in a good fight.  I hope to finally be able to provide recaps of Team USA’s performance at the World Sumo Championships 2019 within the next few weeks, as I haven’t previously had the chance due to covering the Kyushu Basho 2019.

In this post, I provide a recap of the men’s team results for Team USA.  As you’ll see, we had some heavy hitters competing on our men’s team.  Our competitors were Robert Fuimaono, Kena Heffernan, and Roy Sims.  They had a very good shot at getting a medal, and their fighting spirit definitely made our country proud.  Below, I include gifs of their matches along with some commentary.  If you have any questions or comments about the event, please email me at NorthAmericanSumo@Gmail.com.  Thanks for reading!

Our first set of men’s team bouts were against Russia, who were one of the stronger teams in the competition.  I can’t currently locate the team results, but I believe that Russia may have been the ultimate winner (I may be wrong about this, though!  Please email me and correct me if I am!).

Either way, Robert Fuimaono had his first team match against the Russian, Karaev Zaur.  I don’t know much about him other than he is much stronger than his size lets on.

And as you can see, he won the strength match against his extremely strong competitor in Rob.  This was likely due to having a lower center of gravity and better positioning – something all of Team USA can work on in the future.

Next, we had Kena Heffernan against Eduard Kudzoev.  Kena is probably the most technically sound of the three on Team USA, so let’s see what he can do.

Ooo – not quite a henka, but I still don’t like it.  This gives Team USA a 0-2 record against Russia.

To close out our series of matches against Russia, Roy Sims went up against Ruslan Bagaev.  Roy is a massive person, and Ruslan is notably larger.  In fact, it is a little crazy how large Ruslan actually is.  I wonder how well he would do in Japanese professional sumo?

Roy puts up a good fight, but he gets overpowered in the end.  Team USA loses to Team Russia, 0-3.  Roy would actually go up against Ruslan again in the heavyweight bracket.  If you haven’t seen it, you can watch it here.

Now, Team USA was able to compete again in the loser’s bracket.  So, they still had a chance for a medal.  I believe that they went up against Team Brazil.  I would appreciate if someone would email me if I am incorrect about this, however.

Assuming that I am correct, Rob went up against Victor Espirito Santo.  I could tell that Rob was fired up from his first loss and was looking to redeem himself. . .

And he did!  This gave the Team USA men their first victory.  They were up 1-0 against Team Brazil at this point.  Great start to their redemption story.

In the second match, Kena went up against Adiecson Bobsin.  Can Team USA close it out early against Team Brazil?

No, I didn’t mess up creating the gif.  The image above is the livestream from the World Sumo Championships 2019, and the video lagged during this match.  So, the image is what the entire world saw.  A little bit of a bummer, but it is what it is.

Anyways, Kena lost this match, unfortunately.  He left himself open for the toss, putting Team USA’s record at 1-1.  The pressure was on Roy to get the final victory against Rui Sa Jr – a tough task considering that Rui would win silver in the heavyweight division.

Unfortunately, the stream lagged again.  Even more unfortunately, Roy was tossed out at the end, putting an end to Team USA’s hopes of a medal.

Team USA went 1-5 in the men’s team division.  Rob was able to pick up our lone victory, so he was the highlight of our team effort.  Roy and Kena, however, put up really strong showings, and they should be proud of their efforts.  They went up against some of the best amateurs that the world had to offer in the likes of Russia and Brazil, and coming up short is nothing to be ashamed of.

In the following weeks, I hope to provide reports on the other divisions at the World Sumo Championships 2019.  Until then, be sure to continue supporting sumo of all types!